Fear Is My Constant Shadow 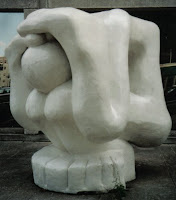 It lurks behind nearly every thought, it impacts nearly every decision, and yet often it feels invisible. Other times it looms large. Does everyone feel this way? If not, why not? Why has fear held such sway over my life, over my decisions, over my inaction, and not over others? Is it something learned? Is it genetic, just brain chemistry gone amok, wacky connections over which I have no control but for which I have paid a high price? I know anxiety and depression run in my family. Is that learned? Do we teach it by how we talk, by communicating certain values, by focusing on certain kinds of emotions? Or is it truly how God made us? My grandfather, I learned last year, was hospitalized at one point for his "nervous condition." I guess I'd always heard he struggled with anxiety and depression, and I know my mom has, too, but that really struck home - maybe it is the neurotransmitters. If it is, is that good or bad for me? Good, in knowing it's not my fault. Bad, in wondering if I can overcome it. If it's hard-wired into my brain, if bad brain chemistry and goofy hormones are really in charge, how can I defeat this demon?

Because that's what it is - a demon. And I want to defeat it. Fear has kept me from so many things, even if I don't want to admit it. I quit grad school because I wanted a family and didn't want to have to go through what I would have had to go through to finish. All that is true, but I know fear played a huge part. I never felt confident enough in myself to believe I could truly succeed in academia, even as everyone around was assuring me not only was I competent, but I could actually excel. I was always fearful somehow that I couldn't do it. That people would find out I was a fraud. That I just wasn't that smart, or whatever.

I often feel like a child in a grown-up world, like everyone else has it figured out but me. I long for a parent to "take care of me." Yes, that's dumb. Yes, it's childish. Yes, it's selfish. But I know I want it because I want freedom from the fear, the constant anxiety - it's not usually high-level, not enough to paralyze me (except post partum, but let's not go there!), but it's enough to have me seeking out escapes, seeking out ways to numb the fear, to soothe myself. The major one has been food. Another has been shopping. I guess at least it's not cocaine and sex, but still... I want to be IN my life. I want to accept challenges and do things I don't think I can, but I don't know how. That's not entirely true. I have pushed myself. I do try things. Often I know and value my own intelligence and can feel confident in certain areas. I just always think others are better.

Knowing that I use food and shopping as soothing mechanisms, unfortunately, hasn't been enough to enable me to give them up. Just because I KNOW I'm bingeing to avoid feelings doesn't mean I can just stop doing it. Yes, it's illogical. Yes, it's self-defeating. Yes, it makes things worse in the long run, not better. But in the short run, it works. I really think there is a biochemical process going on as well as a psychological one. I've read about it, about opiate imitators in wheat, about the serotonin-boosting power of potatoes, about the chemicals in chocolate that simulate feeling in love. I think that's what my body craves, to get to that endorphin release that holds the fear off, for at least a little while.

But if this is the battle, how do I win it? I've tried talk therapy, albeit not specifically for my eating - but can it fix something that is more than just in my head. I loathe being smart enough to realize why I do what I do and to realize how damaging and unhelpful it is, but often just feel powerless to stop it. For my husband, it's not as hard - he just decides to do something, and he does it. I want it to be that easy for me. I want to decide I'm a healthy eater, and be that. Is it that easy?

I'm on Zoloft and have been since Ellie was born. I don't like to be on it. My mom says I'm better on it - more stable, less anxious. But the anxiety is still there. So of course part of me wonders, should I increase the medication? But I don't want drugs to save me. I don't think they can. Can they? Can cognitive therapy? Will I ever get to the point where I am self confident and not afraid to fail and not afraid to succeed? How do I get there? Is it all a mental process, can I think my way into it? Is it biochemical? If so, what do I do?

Sometimes it amazes me we humans can relate to each other, considering how different we each see the world, how much of it is shaped by our own experiences. It makes no sense that I struggle so much with anxiety and fearfulness, with self-doubt, and that I seek out self-soothing, escapist activities, based on my life. I live a good life. I have a loving husband, good kids, I live in a safe area, I am not in want, I am not threatened. I have it very good compared to a LOT of people, and I know that. Still, I want this demon off my back. I want to be someone for whom confidence, faith, and hope come easily, naturally. I want to be willing to fail and not feel that if I do, I will be unworthy or unlovable. I want to embrace life rather than just kind of muddle through it. I don't always even realize I'm doing that, until I realize how many things I think I want to do and how many ways I want to be as a parent, and see that I'm not doing them, that I'm just kind of trying to survive until the next day.

Fear is my shadow, my companion. It feels normal and terrible, all at the same time.
Posted by Unknown at 2:23 PM No comments: Links to this post