(Turn and Face the Strain) Ch-Ch-Changes... 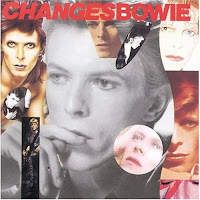 First of all, I always thought that line was "face the strange... changes." Which I kind of prefer. However, "strain" is also somewhat applicable.

You see, my kids go back to school next week. Both of them. As in, my daughter is now a kindergartner and will be attending full-day kindergarten. And I am now a woman 11 years out of the working world faced with the conundrum of what to do next.

I've never been very career-driven. This surprises most people, since I was, in what feels like a previous life-time, a doctoral student in medieval history and intended to become a professor. But not because I wanted the "career" - mostly because I liked history, and had always excelled in school, so why not keep doing something I'd been good at?

Would I have been good at it? Probably. Would I do well in a full-time, career-track job? Maybe. But I kind of like jobs that I can leave behind at the end of the day. Jobs where someone else tells me what to do, and I do it competently and usually get recognized for that. (Neither of those describes motherhood, so no, I don't know quite how I ended up as an at-home mom). I always jokingly say I don't wear my current mom/wife/housekeeper hat particularly well, why would I want to add another hat?

But it's kind of true: if I have to go to work, I want something I can do well but not focus exclusively on, so that when I'm home I can be with my family and focus on them. I guess this comes from knowing two things about myself: 1) When I'm focused on something, I want to focus on it pretty much to the exclusion of about everything else, and 2) Anxiety can keep me from wanting to do things in which I could fail spectacularly. I didn't say those were good or bad things - they're just realities about my wiring.

I want to write. I continually say I want to write. I've even not only been THINKING about potential story lines, but have actually written some ideas down. And yet, I've gone no further. Partly because it's hard to write in 20 minute blips, and partly out of fear of... something. Failure? Rejection? Success? Don't know.

I want to sell things online. I can do it from home. I seem to be good at it. I can make my own hours. And I can contribute at least somewhat to the family coffers. Not much, but something. Will it pan out? Will it be worth it? I don't know.

I want to clean out and organize my house and get all those projects done I've been putting off while home with the kids. How much of this will happen? I don't know.

It feels bizarre to realize that a week from today my kids will be in school for 7 hours and I will be at liberty to decide how I spend all those hours. That are "free". That are "all in a row." I'm excited! But I'm nervous, too.