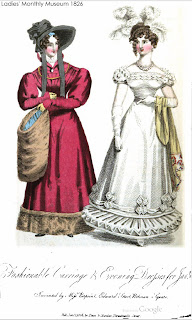 I'm currently immersing myself in a variety of 19th century sources (primary and secondary) as research for writing Regency romances. While reading the 1811 work "The Mirror of Graces," on appropriate character and fashion for women, I came across this tidbit:
"Young women must, therefore, when they present themselves to the world, not implicitly fashion their demeanors according to the levelling rules of the generality of school-governesses; but, considering the character of their own figures, allow their deportment, and select their dress, to follow and correct the bias of nature."

Yes! Even in 1811, wise fashionistas advised others to take into account what kind of figure they had before adopting current trends.

(The dresses pictured to the right are from 1826, so at the later end of the broadly-defined Regency period, spanning about 1795-1830. I am envious of those billowing sleeves - not because I'd really want to wear them, but they WOULD provide an apt disguise for my bat wings!)
Posted by Unknown at 3:06 PM No comments: Links to this post 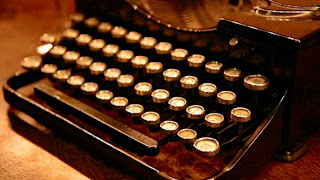 So I've been quiet on the old blog again for a while. Not that that affects anyone beyond me particularly, since I don't have wide readership (understandable, considering how myopic my musings here usually are), but it's been bothering me that I haven't kept up here more.

However, this time at least one of the reasons I've written less here is because I've written more elsewhere. Yes, I actually completed my first draft of my chick-lit/romance novel. 68.000+ words. I did it. It is a complete book. Sure, it's a rough draft and needs editing and some additions, but even if I quit this world tomorrow, I would be able to cross one of my BIG goals off my bucket list.

And that feels like quite the major feat, because I have this, uh, habit of starting a project, or planning out a project, with great enthusiasm, and then never finishing it. I blame anxiety, which brings on paralysis, but I also use anxiety as an excuse, I guess, in that it provides a good reason for never finishing anything - and if I never finish anything, I don't have to deal with the success or failure of that thing. Ludicrous, I know. So to have pushed through and written this book - and to be SHARING said book with friends for feedback - is a huge step for me. Huge.

The next goal? Or series of goals? Leave the book alone until February 1st. I need some space. Then edit it. Then - gasp - figure out how/where to submit it for publication. Yes, I have vowed to do so by the end of the year, although I've since amended that to by the end of June. It's terrifying, but one of the benefits of having repeatedly told myself that I'm writing a story I like and it doesn't matter if anyone likes it (the first half of which at least I believe is true), and of having friends read it and declare it "good" is that maybe, just maybe I'll be able to deal O.K. with the rejection to come.

And what else? Keep writing. Write more books. FINISH writing more books. I find my head filled with ideas - they keep me up at night, when I need to be sleeping, and wake me up early in the morning, when I still need to be sleeping - and I've been writing them down, sketching out additional scenarios. I've been reading more historical background on Regency England, as even though I've read romance novels for years and much of it seems familiar, I know that's no substitute for good research.

So I have to keep pushing myself to do it. But I also have to find balance. One nice thing about my brain is when it latches on to an idea it latches ON. It becomes a full obsession, and I'm willing to work quite hard on said idea. Hence my expansive and somewhat well-known Elvis Presley website of the 1990's. But that nice thing is also a bad thing, especially now that I'm married and have a husband and kids and a house to attend to, as well as other responsibilities to friends and community. Because as much as I want to push them all aside and just focus on this, I can't.

Argh. The art of balance. If only I knew its secret. In the meantime, I'm blogging at 6:00 a.m. rather than sleeping, and daydreaming about my next story ideas. Things could be worse.

Posted by Unknown at 6:18 AM No comments: Links to this post 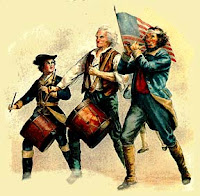 Do you make New Year's Resolutions? If so, how many? Do you go for big goals, such as quitting smoking or dropping 50 pounds, or stick to smaller notions, such as eating more veggies or reading more books? How long are you generally able to keep them?

I, like many Americans today, am feeling resolutionary. I love resolutions. I love the idea of starting over. I love the feeling of conviction that THIS time, I'm going to do it and do it right. But I'm working - against my all-or-nothing nature - to make them smaller, more manageable, more doable. Because I hate the feeling of failure that comes when I, um, inevitably give up. I intended to only have one, but of course the list has grown.

5. Grow out these fingernails. I admit it. I am a compulsive nail biter. I am ashamed of the state of my fingers and don't really want you trying to inspect them. I have short, stubby fingers as it is, so having rawly bitten tips just makes it worse. I HAVE grown out my nails in the past and kept them that way, so I know I can do this. And I will, because it would be nice to be able to start the tape roll, open packages, and peel off price labels again.

4. Exercise 3 days a week. This may sound like a big goal, and considering where I currently am in regards to exercising (on the couch), it kind of is. But I USED to, as recently as mid-2012, go to the gym 5 times a week, so setting my sights on 3 is a way of combatting the "if it's not every day it's not worth it" mentality that I love to employ to keep me motionless.

3. Lose 10 pounds. Yes, it's the inevitable weight loss goal. But considering, um, that I have way more than that that I SHOULD take off, this is a manageable goal. Especially since I GAINED about 18 pounds last year - so dropping 10 only gets me half-way back. But I want something attainable and maintainable, and since I generally suck at doing anything that involves losing and not gaining weight, this is the goal I've set.

2. Spend less money. Uh oh. Getting into bigger goals now. I need to quantify this one - how much counts as less? $5 less a month? $500 less? And I know this goal is more for my husband (the frugal one, thank God) than for me (bargain hunting is almost as thrilling as chocolate), but I want to honor him and be a better model for my kids by reducing my consumption. But I do need to clarify this one.

1. Submit my book for publication. O.K. This IS a big one. Because it terrifies me, and because although I actually finished my first rough draft of my novel yesterday (YAY ME!), I know there's a lot of work to do before my manuscript would be suitable for submission. And then there's being willing to deal with rejection. But I'm gonna do it. Anybody know a good agent?

Posted by Unknown at 7:40 AM No comments: Links to this post