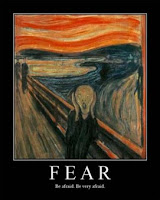 What's it like to be one of the confident people? You know, the ones whose every thought and action isn't tainted by their fear? Fear of what, you might ask? Fear of failure. Fear of success. Just... fear.

I know those people exist. I'm married to one of them. When he decides to do something, he does it. When he's faced with a new challenge, he assumes he can do it. Self-doubt, nervousness, anxiety, fear of not doing it right - none of that enters his brain.

But it enters mine. All the time. It's distressing and disabling, frankly. How many things have I not tried for because I was afraid of something? Of anything? Too many to count. It's embarrassing to admit that, but it's true.

All through graduate school I doubted my own abilities. Other people could do exceptional work and write intelligent, well-researched papers and books, but I was always afraid I wasn't good enough. Even when my advisor, himself a brilliant medievalist, insisted he thought not only could I do it, but I'd be great at it, I doubted him. I know this played a role in me deciding not to finish the dissertation. (I do still think that was the best decision overall given the direction in which I wanted my life to go - i.e., a family -, but I'd be lying if I didn't admit some of the reason I decided not to finish was simply that I worried I couldn't.)

In some ways, then, being a stay-at-home mom has been quite the safe haven for me. Leaving this haven feels scary. But as Ellie is nearly 5 and will begin kindergarten next year, it's something I've been thinking seriously about for a while. Part of me wants to stay home for legitimate reasons - the flexibility of being here for sick days and vacations, for being able to help out in the classroom, for being able to get projects done and just maintain the house a lot better, etc. Part of me probably wants to stay home out of fear, though. And that's not cool.

I heard today about a potential part-time job that *might* be created at my kids' school next year. I got excited - and immediately scared. I did mention to a board member and the academic director that I am interested in this job, which I very much am. It's an administrative assistant type thing, something I do think, in my more rational moments, I'd be quite good at and which would encompass some things I already do for the school, such as editing a newsletter, etc. But the fearful side of me has been plaguing me all day with silly thoughts ranging from, "You can't do it" to "They don't like you" to "Your skills are too outdated and they'll find that out and be mad."

How dumb is this? First of all, I don't even know if the job will EXIST - it's dependent on a lot of financial figures and school enrollment numbers for next year. Secondly, it's months away! Plenty of time for me to brush up on my Office skills, web page abilities, etc. Third, maybe someone else would land the job, but that doesn't necessarily have to reflect poorly on me. Fourth, well. I don't know fourth. I just know this fear is silly, but it paralyzes me at the same time.

And that's no laughing matter.

Tell me, how do I become one of the confident people?
Posted by Unknown at 7:28 PM No comments:

"'The body is a sacred garment. It's your first and last garment; it is what you enter life in and what you depart life with, and it should be treated with honor.' - Martha Graham

In the Garden of Eden, eating was modeled as one of life's most pleasurable experiences. But then Eve took a bite out of that apple (so much for the low calorie, low fat, high fiber theory), and women (and men) have been at war with food ever since. ...Are your weight issues really a symptom of something else--boredom, depression, regret, or rejection? At the root of many issues is our self-loathing at worst, our self-indifference at best. Food is not the enemy. We are. Break the cycle of dieting and replace it with loving yourself enough to make good choices about your diet. Examine your eating habits this week. Are you honoring your body with your food choices? How can you love yourself back to a healthy relationship with eating? Take steps towards defeating the natural compulsion or craving that might take you down a path of regretful eating. Remember the sacredness of your own skin."

This was the meditative e-mail I received from SparkPeople yesterday. I post it here because it resonates with me so well. I do NOT treat my body like a sacred garment, but rather like an old, ugly coat I have to drag around. My body represents all the negative emotions I feel about myself - and toward other people. It's much easier to stuff down feelings by eating them. At least I've learned that.

Maybe it'd actually be easier to feel those emotions - even occasionally express them! I'm working on it. I'm working on letting myself feel angry, scared, disappointed, frustrated, mad. But I'm not comfortable with those feelings. Especially anger and fear. And since, like most people, I feel those often, it's tough. Actually, perhaps I feel fear more often than many other people. I do struggle with anxiety, after all, which I guess leads me to conclude that others don't wrestle with it as much as I do.


In any case, it's time to change my coat.
Posted by Unknown at 8:02 AM No comments:

Tales From The Backseat

Jeff wanted to sit in his regular middle-row van seat on the way home from school today. I explained to him that he either needed to move over to the other seat (normally Ellie's, but she's been opting to ride in the back row lately), or he could move back next to Ellie, since his van door was the only one that opened from the inside (yeah, um, the state of the van is another story...) and we needed our carpool kid to sit there, since he gets out first. Jeff did not like this, but he very begrudgingly moved to the back row.

"Why won't you just sit in the other middle seat?" I asked him.
"Because that's ELLIE's seat," he replied.
"No it's not," I answered. "It's for whoever feels like sitting there!"
"Well, Ellie's been sitting there for a million years and it's all covered with her germs!" he insisted.
I scoffed at this. "That makes no sense! Besides, you're related - whatever germs Ellie has you have, too."

Jeff thought about this for a second, then said, "Really? Because I'm not trying to be mean or anything, but I always thought we adopted her."