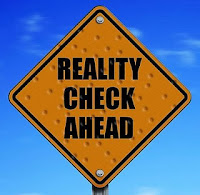 (This blog post is actually an e-mail response to a friend who had blogged about "consciousness" and wanted my response. Her original post is here.)


Thinking about "consciousness" is something I do often. Or sort of, in that what I often find myself ruminating on is what "reality" must feel like to other people. I mean, my husband is probably closer to me than any other person, and yet his life is so different from mine. He is so different from me. He has different thoughts, different expectations, different experiences, and yet we share more of our lives than I do with anyone else. It fascinates me to wonder what life feels like to my fundamentalist next-door neighbor. To the Islamic family across the street. To the elderly couple next door. To the alcoholic woman living nearby, struggling with her kids. These are all people right in my vicinity, but whose lives are vastly different from mine.

Expand that. What's it like to be living right now in south central LA? In London, England? In China? In Africa? We're all living at the same time, in the same world, and yet our experiences of that world are so different at any given moment that it sometimes amazes me we have anything in common at all. And yet we do. When I read Facebook posts, I can relate to so much of what others say. Reading books, watching videos, experiencing all those forms of communication makes me realize we are so very different and yet not so different in terms of basic wants and needs, for the most part. I may be a flaming liberal and you (the general you) may be a conservative Republican, but I bet both of us want to be loved and cared about, etc.

This is something that fascinates me. I'm not into philosophy. It feels beyond my reach. But I love to analyze in a pop psychology way. I may get my philosophers wrong from Western Civ recollections, but I believe it was Plato who postulated there were "ideals" beyond what we see - we see a million variety of cats, but there exists somewhere an "ideal" cat. I don't know if that's true, but what fascinates me is that for most of us, that "ideal" would be different, but yet would still kind of be the same. You may picture a certain kind of chair when you think of chair, I may think of another, but yet they are both chairs. Am I right and you wrong?

So I often wonder if there is such a generic, general thing as reality, when reality is based so much in self. Our understanding of the world is colored, of course, by who we are. By the biochemical wiring of our brains, by our life experiences, by our values (learned or "innate"), by our expectations. I don't dabble in politics much, I don't care for the stress and anxiety it creates in that I don't think I'm going to change your mind, you're not going to change mine, so why argue? But thinking about how we all have our realities that necessarily conform to what we believe and feel to be true about the world helps me understand, somewhat, people who can be political or religious extremists. For them that IS what the world is. Extending that, however, to claim that EVERYONE must feel/experience the world in that way makes no sense to me.

This is one of MY struggles with religion and politics. Just because *I* believe something to be true and valuable, does that mean I have the right to think YOU should believe it, too? Is it even realistic? I mean, I believe strongly in equal marriage rights whether one is gay or straight, but is it fair for me to demand everyone else believe that, too?

I know so much of my own religious and political views are influenced by my personality and how I relate to the world. I am an anxious person. I seem to have anxiety wired into my brain. Therefore I seek out things that make me feel safe. Is this "ideal"? Probably not. But it's what I do - and I think it explains, partly, why the idea of a protective government that provides social services and aims to care for the disenfranchised, the poor, the struggling, appeals so much to me. Because if I were in that situation I want to believe someone would help me, and not that I would be left to pull myself up by my bootstraps, so to speak. Perhaps if I were wired toward independence and self-reliance I would understand Republicans more. (Probably not. ;))

The same goes for religion. I was not raised in a religious household, my mom having decided for herself Christianity did not ring true. As a teenager, we started attending the Unitarian Universalist fellowship, in part because my mom felt she needed to provide some sort of spiritual education/outlet for her children, and partly because I think she needed one herself. I loved it and still do - but I became a Christian in 2004. I have dabbled in and danced with Christianity my whole life - WANTING to believe but knowing I couldn't just "say" I believed to "conform", I had to really believe, because doing otherwise would be a lie and disrespectful to practicing Christians. Do I know WHY I wanted to believe? I'm sure to a small degree to fit in better, but more than that, I craved the "safety", the feeling of being loved no matter what, the feeling that there was something else. Is this rational? No, probably not, in the strict sense of the world. But it fits with my anxious world view. Still, anxiety is not the only reason I sought something else out. It's looking for answers, it's wondering, it's reflecting on a tradition 2000 years old. But it was some personal experiences that cemented it for me, and those are in no way based in science or even logic. I'm O.K. with that.

I'm smart enough to know if I'd been raised in an Islamic area I'd most likely be Islamic. Or Hindi. Or Jewish. So even though I call myself a Christian now, I agree that there's so much I don't know, and so much I feel none of us can know, that I don't make any claims that I'm right and anyone else is wrong. I'm living this life for ME, not for you. I'm open to all traditions and all faiths, and open to the idea that they could all be wrong. They could all be right. I don't know. But for my day-to-day sanity I find it more comforting to believe there is something out there. And I'm O.K. with that.

Anyway, I do ruminate a lot on the idea of consciousness in terms of realizing that I will never truly know what life is like for anyone outside of myself, no matter how close or how removed from them I am. This fascinates me and freaks me out. I watch people turning the corner in cars when I sit at a stoplight and wonder where they're going, what they're thinking, what life is like for them, and these are just people in this town. I realize I will never really know what it's like to live as a black man, as a Latina woman, as part of the 1%, as a Jewish person. I will never know what it's like to be Chinese, to hail from Argentina, to be Russian. I will never know what it was like to live in the 1950's, the 1850's, the 1450's, the Roman Empire. This is partly why history fascinates me - and why I struggled with academe. Because as a historian, I was expected to speak authoritatively on what life in the past was like. But as we all know, history is written by the victors, or at least those with access to power to record, and not only that, but history is EDITED, as well. We can't possibly relate all the details about a time period even if we had them, because then we'd basically have to live the time period again. We necessarily edit history all the time. We write it, color it, interpret it, explain it, from our own perspectives. We CAN'T ever divorce ourselves from our own biases. This is what I struggled with in school, with my gender studies slant - what does that REALLY reveal about medieval history, beyond that that's what interests scholars RIGHT NOW in 21st century America?

Things can constantly be reinterpreted, changed, manipulated, edited, omitted. What does that mean for "reality"? I love historical information - but do I have to constantly worry about what is true? How do we really KNOW Charlemagne existed? Plato? Harriet Tubman? Are those people and their historical acts any more or less true than religious figures and experiences mentioned in religious texts?

We write about medieval history as if we really knew how they lived (I mention this period because it was my era of study), but we work from so few sources it's almost laughable. I'm amazed by how much we can know, sure, but also never forget how much we'll never know. It's like a never-ending jigsaw for which we have only a few pieces.

We read modern newspapers, magazine, even blog posts, and assume they tell us about our world, but I feel more and more the only world we ever really know is our own, the one we can immediately experience. You'd think that would make me better at living in the present, rather than worrying about the future or lamenting the past. It doesn't.

The older I get, the more insular I get. I'm not sure this is good. But if the only reality I really have is mine, why not focus on it? If I can't escape the "I", I might as well embrace it.

But I still love the reminders that, even as I get caught up in ruminating on differences, amazingly there are many, many experiences that link we humans (and even animals) together.
Posted by Unknown at 8:21 AM