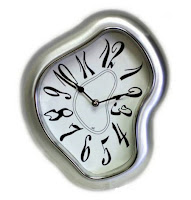 Both of my kids are in school full-time now. This means that my job, such as it has been for the past 10 years, has changed. Before I was an on-call stay-at-home-mom, with a few breaks here and there, maybe a couple of hours for preschool, but nothing major. Now, suddenly, I own my time again. At least big chunks of it.

And it's taking some adjusting. At first it seemed like it was an incomprehensibly large swath of time, and that I would not only be able to get my work projects done, but would also be able to deep-clean the house and get to the things I'd been putting off for years, like the baby books. Only that hasn't happened yet. I'd be able to get to the gym for at least an hour every day, with plenty of time left over to get all the household errands done, as well as a little window-shopping in stores I haven't set foot in since I had kids. That hasn't happened yet, either.

Don't get me wrong - I have time. A lot more than I used to. It's just not as much as I thought it would be. Or, namely, I've once again overestimated what I am capable of getting done in a 7-hour time span. Part of this may be due to time management skills that, well, could use some improving. But I'm not watching TV during the day. I'm not wasting hours on Facebook games anymore (although I am still on Facebook far too often and probably DO spend more time than I realize playing Words With Friends).

What am I doing? A few hours of eBaying - and it takes longer than I think it should, all the collecting and photographing and photo editing and description writing and listing creating and packaging finding and label printing and shipping... On a good day I've gotten 10 listings up. Most days, fewer. I'm "supposed to" be writing one to two days a week, as well. "Supposed" being my word, but I did declare to my husband I was going to do it, and I want to do it. Luckily a writing conference this weekend has actually spurred me on, and I've spent at least 5 hours working on my story this week... and cranked out 2500 words. That's it. Apparently most novels are 80,000+. Eek.

So right now I'm feeling as if I'm trying to do a lot of things, and not doing any of them particularly well. It has occurred to me today that perhaps the goal should be to make enough money to hire someone ELSE to clean my house and maintain my yard, because I don't seem to be making them a priority. Why scrub the floor when I could be listing items online and potentially making money?

What I dislike most is feeling at loose ends. Wondering if I'm spending time in decent ways. Wondering and feeling as if I ought to be doing it differently, but not knowing - yet - what that would mean. I'm not even taking time to socialize and hang out with other moms. I'm not really shopping much - not leisure shopping, at least, except for Friday mornings when I hit the garage sales searching for cheap treasures to sell high on eBay.

I dislike the frantic feeling. I need to learn that I can't do everything at once. I can, as the quote goes, do SOMETHING at once, however. It's O.K. to focus on one thing at a time. It's BETTER to focus on one thing at a time. And I may have to make some choices. Do I focus more on the selling career? Do I stop it and focus on writing? Do I find a balance and do a little of each, knowing that results will take longer to appear?

I had made up a daily schedule, but don't really seem to be following it as well as I thought I would. Maybe generally, yes, in that Tuesdays I list on eBay and Wednesdays I've been writing. It hasn't helped that I've been sick, and have spent some of this "free time" in bed. But, oh, the luxury of being able to do so - of being able to crawl in bed and just sleep when I'm not feeling well, instead of having to try to entertain and take care of little people who don't give a hoot about the state of my health.

It's only September. It's only mid-September, at that. This change will last the rest of my life (summers not included, of course). And it will only get worse, in a manner of speaking - the kids will need me less and less, they will eventually go off to college and have their own lives and own families. It's weird to think that. It's such a change from the intensity of the early years of mothering.

Hopefully by the time my kids are grown-ups I'll have figured out this time-balancing thing. But I kind of doubt it.
Posted by Unknown at 7:20 PM