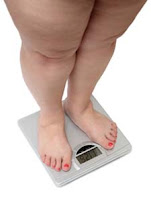 When I was 12, I used to tell myself that when I was 40, I would eat whatever I wanted and get as fat as I wanted because by then nobody would care what I looked like anyway. Apparently 40 was either the oldest age I could imagine, or, more likely, the youngest age at which I thought I'd be able to get away with it.

Did other kids think this way at 12? I have no idea. I would guess not. Maybe it was my way of dealing with the increasing pressure to be thin and beautiful that was making itself apparent as I muddled my way through middle school. I certainly didn't fit the ideal. My mom was painfully aware of that, as well, and she began the first of many attempts to manage my weight (well, the first one of which I was cognizant, at any rate). I was sent to see the dietician at the local hospital, who put me on my first (of what would become many) calorie-restricted diet. I followed it pretty well, being the people-pleaser that I am, although I also remember becoming aware that I COULD still eat that ham and cheese from Hardee's, as long as I didn't eat much of anything else that day. Oh well. I lost some weight and other people seemed happy.

(By the way, I don't blame my mom any more. She was fighting a far larger battle than she knew, with this compulsive eating/food addiction demon of mine, and I know she just wanted what was best for me and for me to be happy with myself.)

So I think that's why this fantasy must have first popped into my head at that time of finding a way to escape the pressure and the feelings of not being good enough. Those feelings followed me all the way through adolescence into adulthood, however. Through countless attempts at Weight Watchers, through crash dieting, and even through a brief but nasty dance with bulimia in college.

During those attempts, I would usually lose some weight. I would usually start garnering attention from boys, then men. Imagine that! And slowly - but surely, most surely - I would put all the weight back on. Or sometimes quickly: a 20 pound Weight Watchers loss in 11th grade was followed by a 30 pound gain as a senior in high school. A 40 pound drop in college, again through less-than-stellar eating behaviors and over-exercising, came back on fairly quickly the following year, as I gorged my way across campus and back into the size 20 jeans.

Of course in reality I wouldn't be happy there, either. Oh, I would be for the half an hour or so that the food highs last, but then even if I managed to give up the guilt and self-loathing cycle that inevitably follows, I'd still be dealing with the physical realities of overeating. I already am, with all this extra weight and my droopy Batwing arms and aching knees. I don't like how I look in pictures (unless I can control the angle and hide that chin - thank you, iPhone camera). I can't do all the things I want to anymore, physically speaking, and age is now making itself felt alongside the ever-present weight reality.

The brain is a curious thing, isn't it? Because for as long as I can remember I have felt I at least OUGHT to be trying to lose weight and be fit, even if I weren't succeeding. I still do mostly feel that way. But at odd times, since I turned 40 in March, I've had that 12 year old whispering in my ear: "You don't need to exercise so much anymore. You're 40. No one expects you to." And, "It's O.K. to take the elevator at the library instead of the stairs. You have an achy knee, and besides, you're 40. It doesn't matter anymore what others think." Even, "Who cares if you haven't washed your hair in a few days? You're 40. Nobody's looking at you anymore anyway."

Excuse me? What kind of twisted thinking is that?

It's what's going on in this brain of mine, that's what. I'm rebellious and angry, and now battling the "It doesn't matter anymore!" devil sitting on my shoulder.  And frankly it's left me feeling like crap. Maybe even depressed. I feel like I haven't got a grip this fall, like I'm never doing what I'm supposed to be doing, not accomplishing what I'm expected to accomplish, not caring about things I used to care about. All I want to do is sleep. And eat. And sleep. Is that not the hallmark of depression?

So where to from here? Do I have to keep fighting the fight? Do I have to keep battling myself on these issues? I'm so tired. I'm so tired of it. Why can't I be a "normal" person when it comes to food? That 12 year old is pretty pissed off that 40 has come, but freedom from food and body obsession hasn't. And she's still telling me, "Give in. It doesn't matter any more. Give in. No one cares."

But they do. My husband does. Not only does he prefer a freshly showered wife, but surely a somewhat smaller, fitter one would be appreciated, as well. At least one who puts some effort into it. My friends and family do - not because they need me to be a certain size, but because they want me healthy and happy. My kids do. They may not care what I look like, but I'm pretty sure they want me around for a while. And also happy. And they need me to be a better role model for them when it comes to this stuff.

I'm trying. My son mentioned this week that the kids at school had made comments about his weight, and I went off on how he's a bigger-built kid and will ALWAYS be bigger and even weigh more than the other kids, because of the size and density of his bones - something I wish someone had explained to me before I was 20. And I said what matters most is that he eats healthfully in good portions and exercises regularly - and whatever his body size is he can leave up to God. Hopefully repeating that often while encouraging said habits will keep my kids from the poisonous self-talk that permeates my brain. And maybe I'll even come to believe it.

It's been all I can do this fall to stay on this gluten-free, dairy-free, egg-free diet that we've adopted to see if it helps my son (and me). Even then, I've cheated at least once a week. But apparently that inner child, that spoiled little brat who wants no restrictions EVER, has just not been able to accept and act on the idea that I should be careful about what I'm eating even when limiting certain categories, because it's been a lot of potato chips and gummy bears these past two months.

I've been eating poorly. I haven't exercised hardly at all. I haven't written more on my book. I'm sure all of those are contributing to my great feelings of self-dissatisfaction as of late. Is it true depression? I don't know. I don't know. But I'm sad. Sad. And not sure how to dig myself out of this pit yet.

Could someone please tell her to shut up?