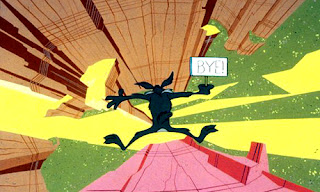 These are the themes of my life. I'd like to write a new chapter, start over in a new book whose message is Courage. Hope. Confidence. Enthusiasm. Willingness. Confidence. Action. Writing.

But for now, I'm stuck in this chapter. And I have writer's block. How DO you effectively change the patterns of your life? How does one push past comfort into courage, inertia into action, anxiety into a willingness to challenge oneself? For me it's as if those are separated by a large gulf between two cliffs, the kind into which Wile E. Coyote was always falling down.

On the other hand, Mr. Coyote always got back up to chase the Road Runner another day. Falling down into fear doesn't have to be permanent. Ironically I've heard myself lately telling several friends who are going through tough times that "Feelings aren't facts." And they aren't. Yet I let them rule my life as if they were.

I promised myself I would work on my book this fall. I don't think I've touched it in over a month. I don't fully know why. Except that fear and anxiety are still lurking around the corner - that feeling of some big Boogie Monster standing over my shoulder with long, pointy teeth, laughing a purple laugh and exclaiming, "YOU? You can't write a book! That's for REAL authors. You're just a housewife with no official writing training. What makes you think YOU can write?"

And even though I tell myself over and over again, write it for me, write it as if you don't care if anyone else ever reads it, much less likes it, I balk. I chide myself, "Write the story I like, without regard as to whether or not anyone else ever thinks it's any good." And yet the pages go unwritten. I've thrown myself into Regency "research", pinning tons of images on Pinterest relating to Regency themes, watching Regency shows, ordering Regency books. Of course I haven't read them, much less sketched out my own Regency stories. It's far less scary to throw myself into the prep rather than the execution.

It's a theme of my life. Big ideas, big desires, big fears. It's much easier to stay in my comfort zone. My little bubble. The anxiety demons don't get me here as often. But I also don't get much done in here.

So, as a very small 'Kiss off!' gesture to the demons today, I wrote a blog post. In haste. Without editing. Or really coherence. It's just me vomiting feelings on the page, but it's more writing than I've done in weeks. Aside from those Facebook statuses which, while often amusing to myself and apparently to others, really don't comprise novel material.