Merlin and Arthur and Merthur - Oh My!

Warning: Spoilers ahead, including season 5!

I admit it. I’m addicted to the BBC series “Merlin”. I only started watching it via Netflix a few weeks ago on the recommendation of my dear friend Kary, who kept raving about it. A few weeks, and I’ve already inhaled seasons 1-4. I’m now waiting on season 5, which hasn’t aired in the US yet and thus isn’t available on Netflix. It’s, uh, arriving in the mail tomorrow from Amazon.

I already know how the series ends, however, because of the magic of the internet (thank you, YouTube. I think.) and my impatient nature. See, I started a Pinterest board to pin up pics of the stars of the show, Colin Morgan and Bradley James, but kept coming across images from the final season. With good reason - it is is a powerful ending. Powerful and amazing and sad.

But I’m getting ahead of myself.

I’ve always had an interest in the Arthurian legends. The characters of Arthur and Merlin and Guinevere and Lancelot are known to about anyone familiar with Western Civ. I’m pretty sure I took a class in college or grad school that read through some of the lit, as I have vague memories of L’Morte d’Arthur and Geoffrey of Monmouth. So that brought up a natural curiosity about the show: what spin would it put on the stories? Would it stay true to the mythology? And how are they going to get away with such a young, cute Merlin?

And he is cute, which is another reason I happily dove into episode 1. I have always been a sucker for a good-looking man, and this show promised at least two. I also, er, like shows and books that, um, apparently are aimed at 14 year old girls (Twilight, anyone?), so the “Camelot High” tone, as Kary described it, of the 1st season, was quite fun. The silly, improbable plot twists - in season 1 and throughout the series - are mostly fun, too. Some of them you want to roll your eyes at, others seem impossibly clever (Guinevere as a servant?).

The show also very smartly draws you in using familiar but effective tropes. First, as already stated, most of the myths and legends are somewhat familiar to us, so we think as an audience we know what to expect. But not completely - just enough to keep us (or at least me) hooked, and to have us (me) nodding, “Oh yeah!” when certain events (Excalibur) or characters (Sir Gwaine) pop up. Second, we know secrets the characters don’t. Kind of like Merlin, who knows all about Arthur’s destiny and Merlin’s own role in it, when no one else does (O.K., outside of Gaius). So we feel armed with secret knowledge, and that keeps us on the edge of our seats, wondering if and when the characters will see what’s really going on. We know Morgana has turned evil long before most of the characters do. Same with Aggravaine. And of course we’re privy to Merlin’s magic, something he must keep hidden from very nearly everyone, which makes us feel more connected to him, as if we’re in league with him. 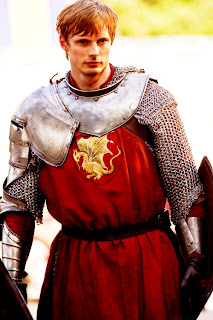 The characters are familiar, too - not just because of who they are in historical legend, but because of the classic temperaments/personality types they embody. I recently saw a pin on Pinterest comparing the four main characters - Merlin, Arthur, Guinevere, and Morgana - with the four main Houses in Harry Potter. It’s an apt comparison. Those kinds of characters work, especially when paired with each other. Opposites really do attract, and the dichotomy of the personalities and how their differences and similarities play off each other makes for very compelling storytelling - in Merlin, and across other fictional works throughout history. We seem to like those opposites. They speak to us - we can see a little of ourselves in one character or another.


Arthur is the quintessential alpha male. As he should be; he’s the Prince who will become a King. He embodies the ultimate in masculinity - he’s courageous, valorous, a champion. Bradley James completely looks the part, with his muscular frame and square jawline, his crisp, sexy British accent. He just looks... kingly. 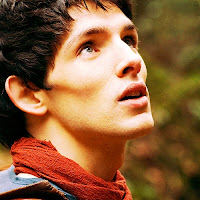 Merlin is the intellectual, the scholar, the helper. Colin Morgan is certainly attractive, but no one is going to mistake Merlin for a big, beefy knight. He’s not supposed to look like that. He’s supposed to look wise and magical, and he does - like a sprite. He’s loyal, dependable, humble, and true.

Guin is the solid, dependable friend, Morgana the beauty with an evil desire for power inside. We’ve seen it all before. And we still love it.


But really, if all it were were pretty people and familiar characterizations, I wouldn’t be this obsessed with this show. I’ve seen and enjoyed plenty of other shows like that. I watch Glee and Vampire Diaries weekly and enjoy them immensely. But it’s not the same. Why?

Because of the depth of the relationship between Arthur and Merlin.


It’s amazing, it’s intoxicating, it’s incredibly moving. And it’s so exciting to see such a real, emotional connection between men, a true male friendship. Much of their friendship, of course, is unspoken - they ridicule each other, malign each other, curse each other (especially Arthur’s treatment of Merlin), but we as the audience see - through their body language, their facial expressions, the depth of emotion in their eyes - how these two really feel about each other. It’s a bond that largely remains unspoken throughout the series, until the very end.

This is where the actors in this show absolutely amaze me. Colin Morgan and Bradley James are so adept at expressing a multitude of feelings just through their eyes and body language alone. I know that that is what acting is all about, but believe me, I don’t know many actors who pull it off as well as these two do. You can see the pain behind Arthur’s teasing, see the sorrow behind Merlin’s grin. And, oh, how Colin/Merlin can cry. In this era of “real men don’t cry,” is it not refreshing to see men showing real tears? It is for me.

The intensity of this relationship, especially in the last few episodes, has had people across the 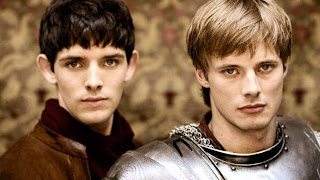 internet speculating and ‘shipping’ the characters - and the actors. Such a relationship must go beyond friendship, they seem to argue - it must be romantic and sexual. No men interact that way with each other unless they’re involved in a physical way. I’ve heard there is a lot of fan fiction describing explicit sexual encounters between Arthur and Merlin. I’ve seen suggestive pictures on Pinterest. There are lots of references to ‘Merthur’ and ‘Brolin’.

Really? Really? Why must we always go there? Why do we, as a culture, assume that if two men show genuine caring and emotional involvement with each other, they must be gay?

Not, as Seinfeld says, that there’s anything wrong with that. I’m a staunch supporter of gay rights and gay marriage, have lots of friends and family members who are gay, and have absolutely no problem with the variety of sexual orientations that are out there.

But it frustrates me that that seems to be the only conclusion many people can draw about these characters - and about the off-screen, real-life friendship between Colin Morgan and Bradley James. The question that overshadows a lot of things is, is their relationship (Merlin/Arthur, or Colin/Bradley) sexual or not?

For me, sexualizing the relationship between Merlin and Arthur cheapens it, and cheapens what the two actors were able to accomplish in their portrayal of it. They have a bromance, for sure, but I don’t think it was intended to be a romance. Merlin had Freya, albeit very briefly. Arthur showed interest in a variety of women, not just Guin - although the family-friendly nature of the show kept all of that quite tame. But even if they hadn’t thrown in those plot points, I still think that friendship, a soul-connected friendship, is what binds Merlin and Arthur. They ARE two sides of the same coin. Why can’t we imagine intense, emotionally-intimate friendships between men that don’t involve physical intimacy?

Of course another good question is, does it matter? Does it matter if the relationship between Merlin

and Arthur, or between Colin and Bradley, DOES go beyond friendship? This seems to be a driving question of our time - we seem obsessed as a society with figuring out who’s gay and who’s not. I even had to admit that I spent some time yesterday on Google, trying to see what I could find out about Mr. Morgan and Mr. James. Why? It doesn’t affect me personally. It was rather offensive for me to even be prying into that, when I really thought about it. I will never meet Colin Morgan or Bradley James, much less have a relationship with either one of them (sigh), so what difference does it make to me?

I guess because I LOVE the idea of two men getting the opportunity to experience the miracle of such a close bond - on screen and off. Friendship is powerful. Powerful. Knowing someone is there for you, that they’ve got your back. Being willing to have theirs. Wanting what’s best for them. Truly loving them. There’s nothing like it.


I am a romance novel junkie and an aspiring romance novelist. I crave romance. I love the idea of strong, passionate relationships and happily ever afters. I have since I was a little girl, and it continues to this day, my desire to live in a world where love conquers all and the intense, passionate, romantic, physical, and sexual attachment to one person is the ultimate goal. 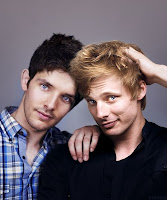 But friendship is undervalued. And to see a friendship like this - between MEN - is thrilling. Because I want my son to have friendships like that. I want my son, and all other men, to feel ABLE to have friendships like that. Many men do, I know. I suspect others, especially young men, keep their guy friends at a distance because they don’t want their attentions to be mistaken for something else. It’s sad that it would even matter - the only people to whom one’s sexuality should really make a difference, I think, are the person him/herself and whomever they’re dating. But it still does. And it’s damaged male friendship along the way.

I love this show. Love it. It’s excruciatingly painful at the same time, however, now that I know for sure how it concludes. We all know the stories. We all know Arthur dies in the end, but to experience it on screen is heart-breaking (and I’ve only seen snippets, not yet having watched season 5). We’re so used to our happy endings in America that to have one that is otherwise just feels...well...wrong. But it’s oh-so-powerful, it’s what keeps our guts wrenching long after the episode and the series has ended, the idea that this powerful friendship has been divided and has come to an end. What a loss.

And so a series that started out for me as a pleasant diversion, an indulgence in my guilty love affair with pop culture and shows meant for swooning teenage girls, has become much, much more.


Yes, people, I know it’s a television show. It’s not real. But it has reminded me again of some of the most powerful experiences in my own life: the devastation of betrayal and loss, and the healing balm of friendship and connection. It’s a show about ideals, portrayed in some idealistic and of course unachievable ways, but that doesn’t mean it doesn’t speak truths about loyalty, loss, love, and friendship. And speak them magnificently.