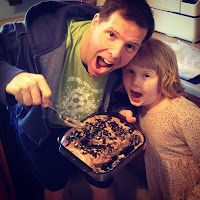 It's so fun to watch children's minds at work, isn't it?

My daughter, who's almost 7, is always coming up with zany ideas, such as building a surfboard out of the living room couch cushions (as she's doing right now) or constructing her own puppet theater out of a cardboard box or coming up with a way of getting more desserts out of mom and dad.

The latter was her objective recently, as a week or so ago she announced we were going to have a baking competition. Never mind that she doesn't really bake. She excels at helping to pour ingredients and insists on standing in front of the mixer so that actually making any given recipe feels somewhat like playing a game of Twister. But mom is the baker.

This time, however, mommy was the judge. And daddy and Ellie were going to be the contestants. Ellie chose a recipe that had been hanging on the kitchen cabinet for weeks - a chocolate peanut butter Oreo whipped cream dessert. Apparently she was tired of just ogling it and wanted us to actually make it, darn it. Ironically, her dessert required no actual baking, just the assembling and mixing of ingredients. Daddy decided to make cookie dough skillets - warm cookie dough smothered in ice cream. Clearly he was trying to influence the judge (me), since he knows I far prefer cookie dough to any actually finished cookie product. 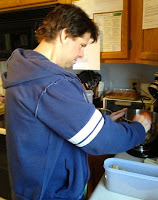 Yesterday the competition commenced at 10:00 a.m. Ellie read her recipe by herself and helped pour ingredients, although I did, um, command the mixer. But she crushed the Oreos and followed all of the steps carefully, gleefully pushing Reese's Peanut Butter cups into the final product.  Meanwhile I was so excited about husband making cookies on his own that I snapped his pic. I'm not sure he appreciated that.

In any case, once the baked items were done we all dutifully fulfilled our obligations of testing the creations. It was a hardship, to be sure. The two judges (my son and I) decided to make it a democratic vote and allow every family member to pick their favorite. Ellie's won 3 to 1, with Brett voting AGAINST his own dessert!

We're pretty sure we'll be having more baking competitions in the future, given that we all got to have TWO desserts in one day.

What I want to know is, how did the judge end up doing all the dishes?
Posted by Unknown at 9:24 AM